Don’t you love expensive cars?! I know I do!

There’s something to be said about the presence and power of expensive cars demand. We’ve put together this collection of the 20 most expensive cars in the world. Drive one of these bad boys, and you’ll turn a lot of heads!

If you could only choose one to have for a day, which one would you choose?

The 20 Most Expensive Cars in the World

The list of cars and figures mentioned below has been compiled from various sources around the web, such as Wikipedia, beautiful life & thewisdompost.

These are the 20 most expensive cars in the world: 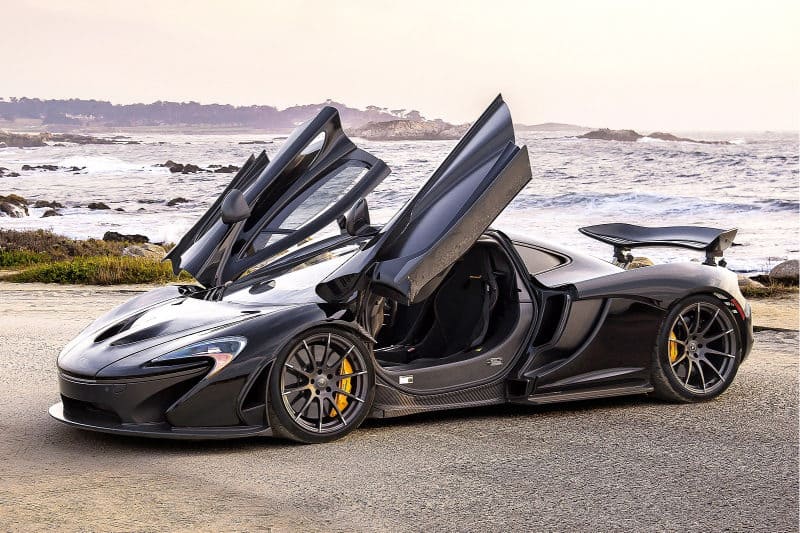 Kicking off our list of the 20 most expensive cars in the world is the McLaren P1.
Following the footsteps of the iconic McLaren F1, this limited edition hybrid supercar was released in October 2013 by British manufacturer McLaren Automotive.

Interestingly, 34% of all cars were purchased by owners in the United States, followed closely by 26% in Europe.

All 375 cars sold out within one month of release! 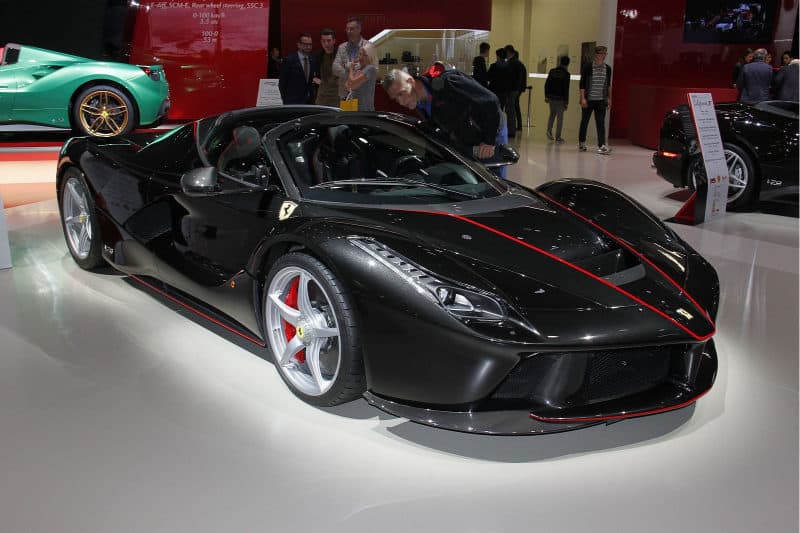 The first Ferrari on our list is the Ferrari LaFerrari, or Ferrari “The Ferrari” after translation.

A compelling head turner, this limited production hybrid sports car was one of Ferrari’s most ambitious projects.

According to Ferrari, the goal of this car was to push all the pre-existing boundaries of technology in a road car.

It’s a stunna, that’s for sure! 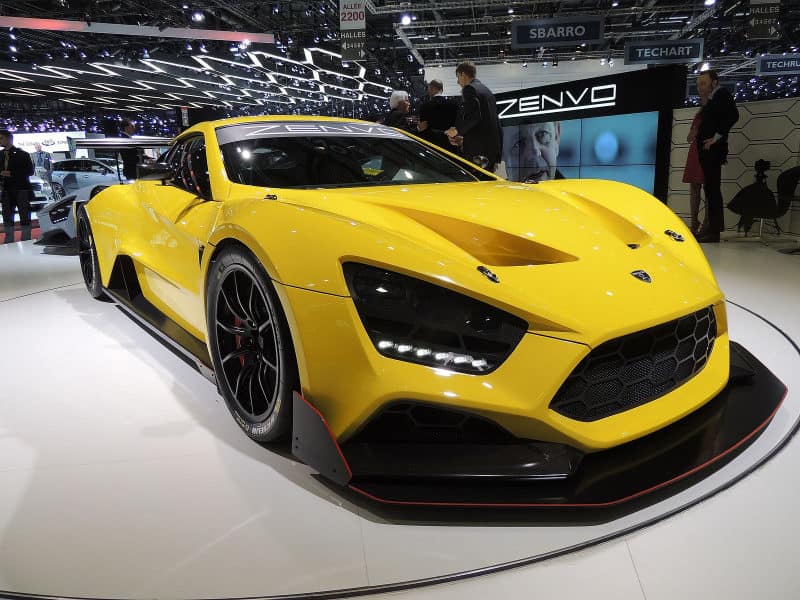 First unveiled at the 2016 Geneva Motor Show, the company only plans to release five cars per year to maintain exclusivity.

Sharing a similar body shape and chassis with its predecessor, the ST1, the Zenvo TS1 has an upgraded interior and a 5.8-liter twin-supercharged V8 engine. 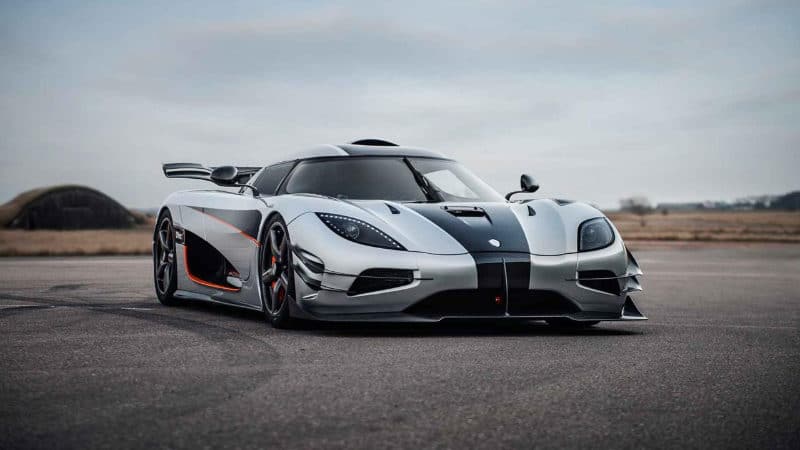 Deemed as the “Worlds first Mega Car” by Koenigsegg themselves, the Koenigsegg One has a 5.0-liter V8 twin-turbo engine and generates 940 horsepower.

The car was introduced in 2014 and was one of the most exclusive production car programs ever envisaged in the car industry.

Another expensive sports car from Koenigsegg, but well worth its place in our list of most expensive cars in the world. 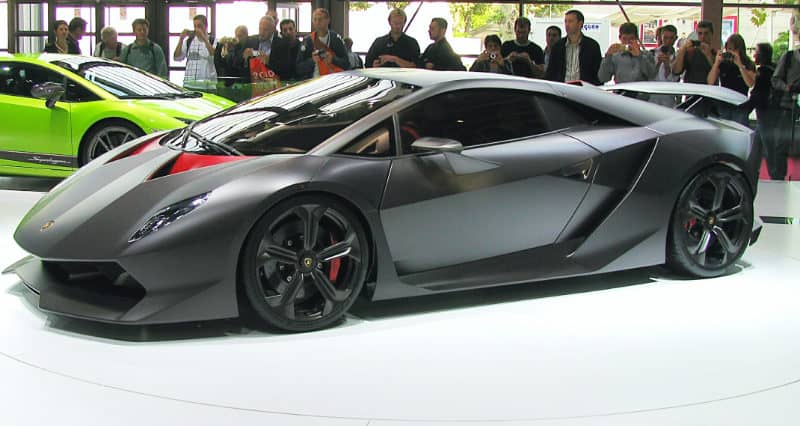 This one’s a beauty!

Lamborghini said that this car would redefine the future of super sports cars.

Making its debut at the 2010 Paris Motor Show, the Sesto Elemento is a lightweight track-only car, that’s name references the atomic number of carbon, in recognition of the car’s widespread use of carbon fiber.

The Sesto Elemento is equipped with a 6-speed semi-automatic transmission and a 5.2-liter V10 engine. 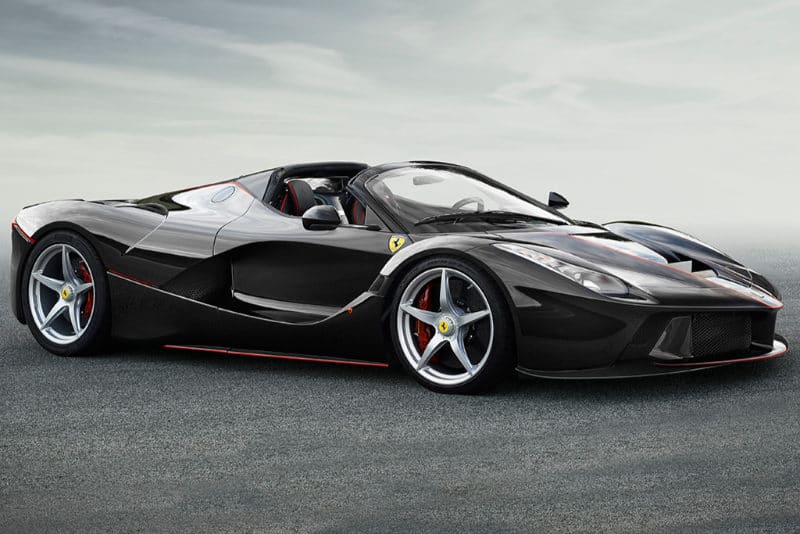 It’s no surprise to see another Ferrari on the list, they’ve always made some of the world’s most expensive cars.

This time, it’s the Ferrari LaFerrari Aperta, a beefed-up version of its predecessor, released to celebrate Ferrari’s 70th year in business.

If you like the LaFerrari, then you’re going to love this open-top hypercar, as it’s more or less the same car but on steroids!

According to Ferrari, all units were already pre-sold to an exclusive list of customers via invitation. 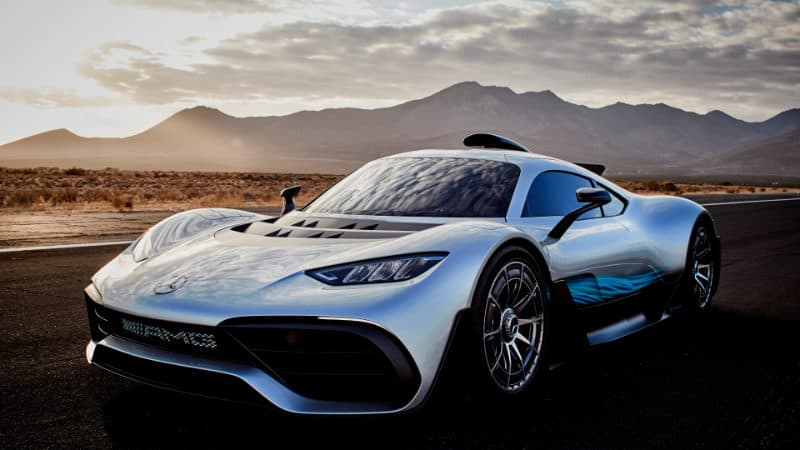 To celebrate their 50th birthday, the guys at Mercedes Benz AMG decided to make one hell of a hybrid sports car.

Unveiled at the 2017 International Motor Show in Germany, the AMG One sold out of all 275 units and will not manufacture any more to preserve exclusivity.

Selling out so quickly might have something to do with Lewis Hamilton helping to develop the car, or it’s 1.6-liter turbocharged 90-degree V6 engine that produces a top speed of 217 mph! 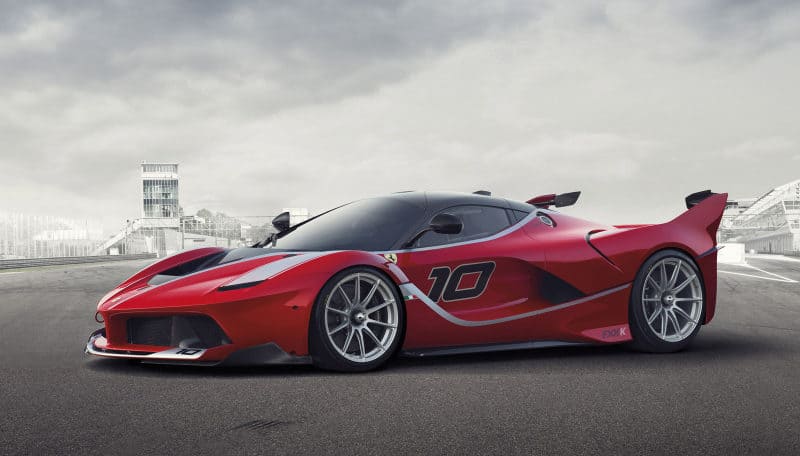 Designed by Marco Fainello, Flavio Manzoni, and architect Evan Rodriguez, the FXX K is based on the road-legal LaFerrari.

FXX K is Ferrari’s research and development vehicle. The K refers to the kinetic energy recovery system (KERS), which is used to maximize performance.

A total of 40 cars were produced between 2015 – 2017 and are being held and maintained by Ferrari, available for their owners to use on track days. 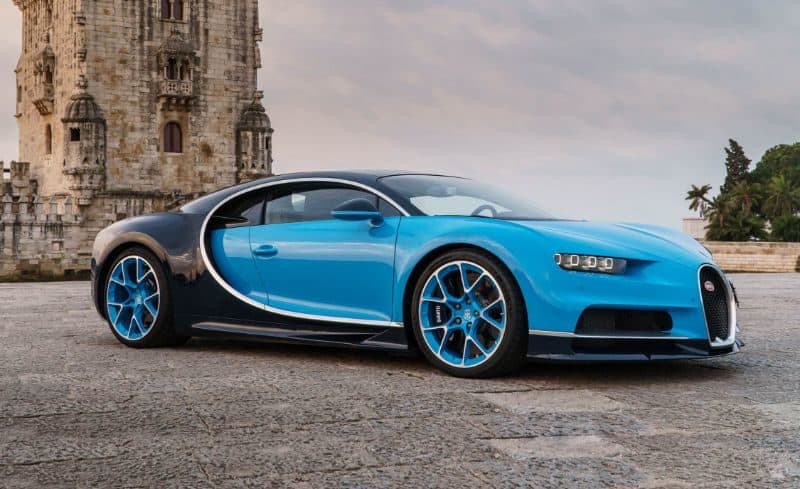 The Bugatti Chiron is a mid-engine supercar manufactured by Bugatti Automobiles S.A.S.

First unveiled at the Geneva motor show in 2016, buyers were required to put down a $200,000 deposit. The first 200 units sold out before the first delivery of the car.

However, its speculated that its actual top speed could be as much as 281 mph! 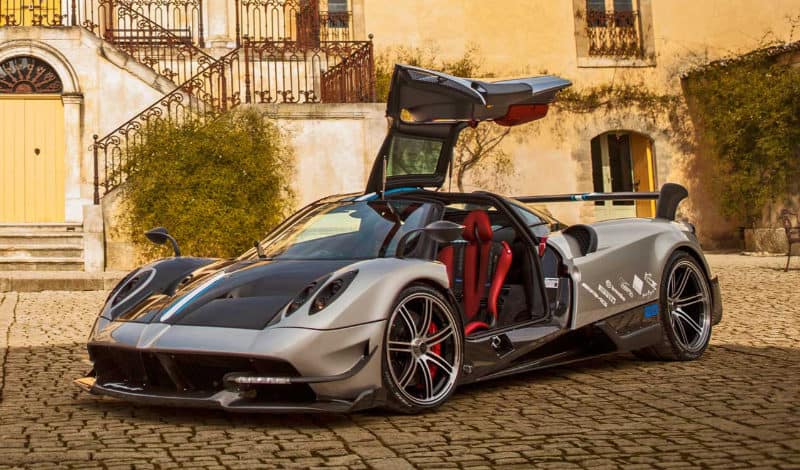 One of the most expensive cars ever designed, the Pagani Huayra BC, is genuinely an epic automotive accomplishment.

Inspired by the Zonda R, and featuring sideways opening doors, Pagani has also increased the power, revised the chassis and brakes, and included a new 7-speed transverse gearbox.

It gets its name from one of Pagani’s original investors, Benny Caiola, who was also the first Pagani customer and friend of the founder. 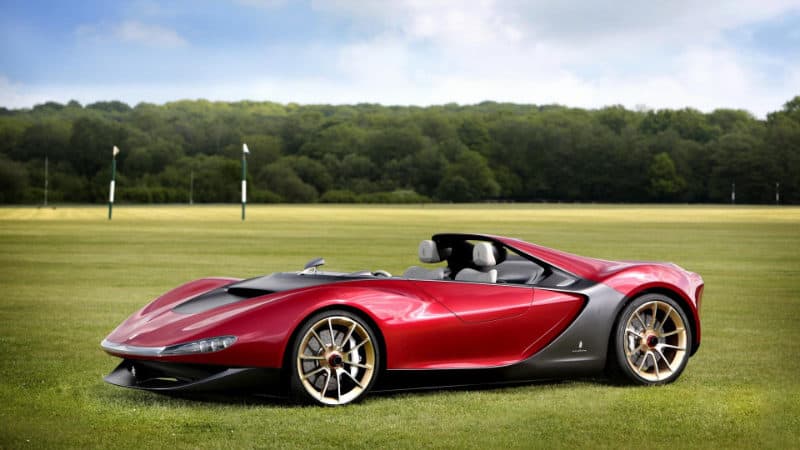 Breaking into the top ten is the Ferrari Pininfarina Sergio, one of the most expensive cars on the list.

Introduced as a concept car in 2013, the Pininfarina Sergio was unveiled at the 2013 Geneva motor show.

It was a tribute to the former chairman of the company and Sergio Pininfarina, the legendary automotive designer who died just a year before.

The design was based on the Ferrari 458 Spider. Only six were made and all sold to a group of high net worth individuals. 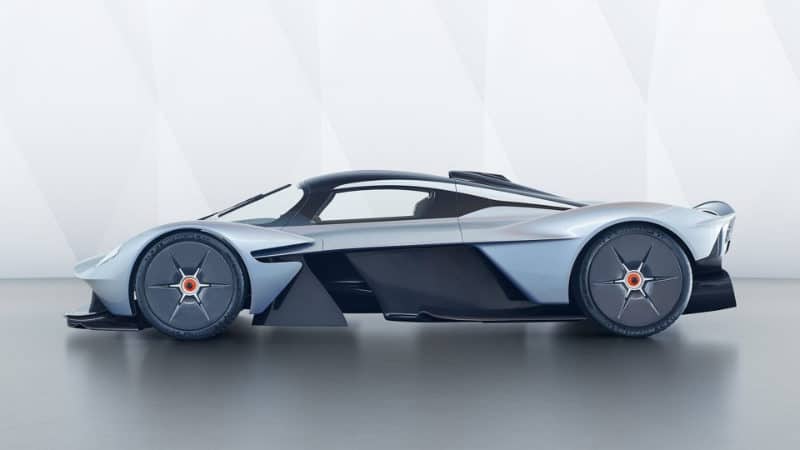 The first car on our list that’s the result of a collaboration between different manufacturers.

British automobile manufacturer Aston Martin teamed up with Red Bull Racing and several other manufacturers to create this beast!

Developed as a track-oriented road car, it now holds the title of the fastest street-legal car in the world.

It houses a 6.5-liter aspirated V12 engine tailored by Cosworth and has a power output of 1,130 hp!

Only 150 road cars have been made. 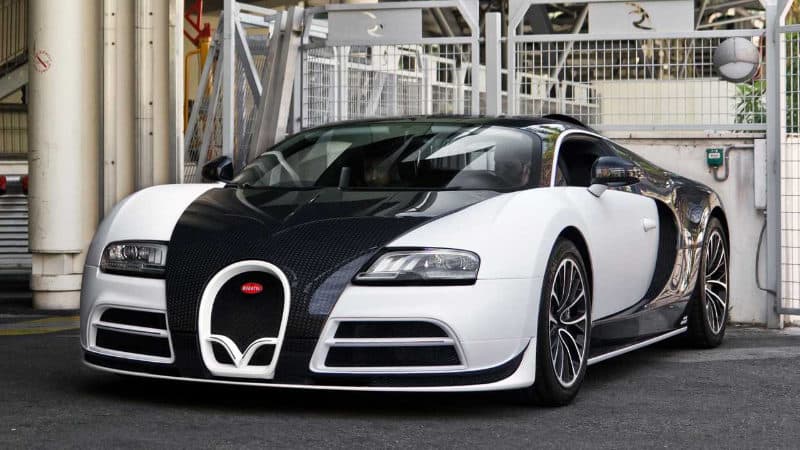 The car was modeled on the Grand Sports Vitesse Roadster and had an 8.0 L W16 engine that produces 1,200 hp.

It’s one of the fastest cars in the world, and the original version was named the Car of the Decade 2000-2009.

Reaching a top speed of 253 mph, it holds firm at number 8 on our list of most expensive cars. 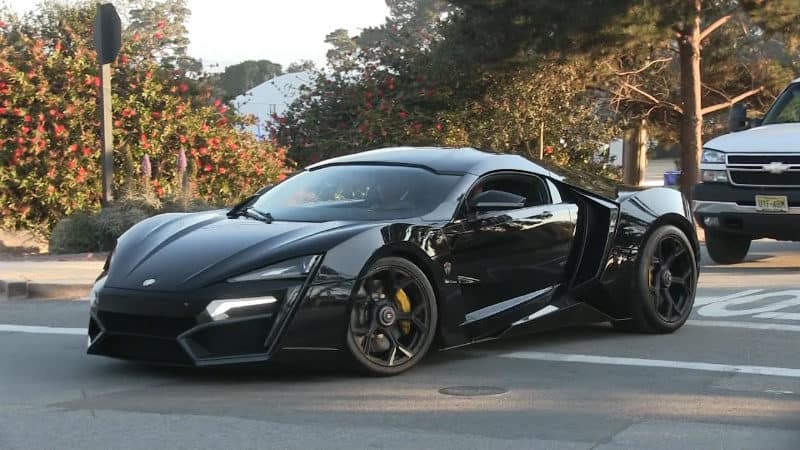 Words can’t even describe how nice this is.

It’s the product of W Motors, a Lebanese motor company that collaborated with both Lebanese and Italian engineers.

The HyperSport was the first car in the world to have headlights encrusted with diamonds (15cts).

Buyers also had the choice of rubies, yellow diamonds, and sapphires.

All that power means the car can reach speeds of up to 240 mph! 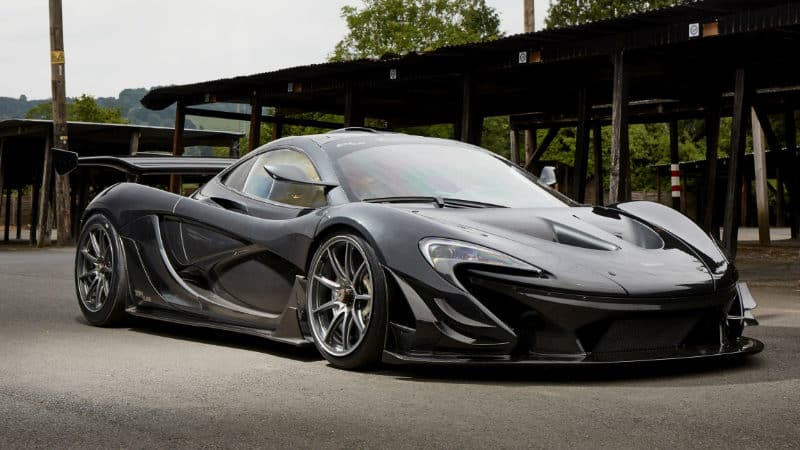 The McLaren P1 LM is more or less a street-legal version of the track-only McLaren P1 GTR. Lanzante, a British firm, bought the original P1 and converted it for sale.

Six films were made in total. Five were sold to private buyers, and the sixth, codenamed ‘XP1 LM,’ the prototype P1 LM, is now being used for development and testing purposes.

The P1 LM features a larger twin-turbocharged V8 engine than the P1 and P1 GTR and reaches a limited top speed of 214 mph! 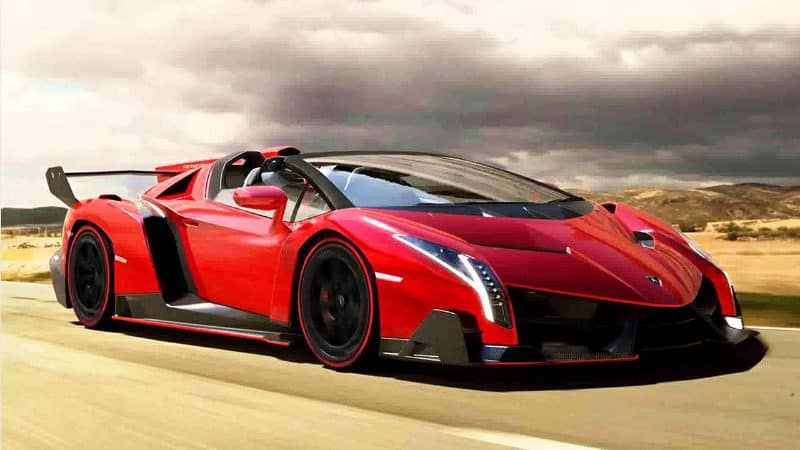 Veneno means venom or poison in Spanish and the car certainly gives off a deadly presence.

Based on the Aventador, the Veneno was created to celebrate Lamborghini’s 50th anniversary and was introduced at the 2013 Geneva Motor Show.

It can reach 60 mph in 2.9 seconds, and it’s price tag makes it one of the most expensive production cars in the world! 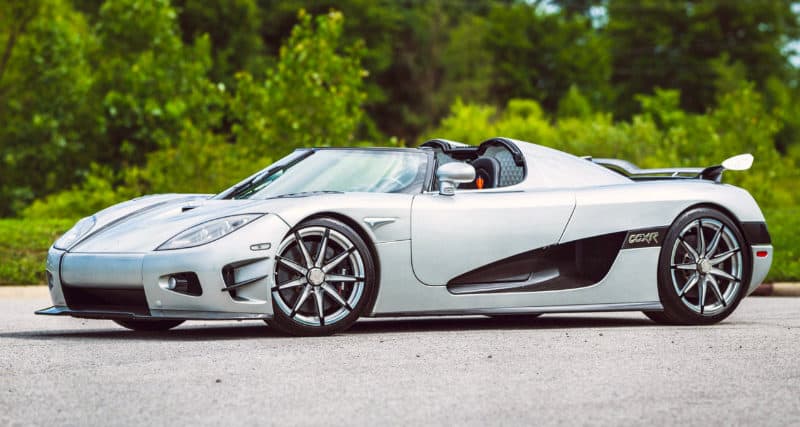 Intended to be limited to only three units, the CCXR Trevita cost so much to manufacture, Koenigsegg decided to make the car even more exclusive and limit the number to just two.

Some of its features include a diamond weave carbon fiber finish, a unique double carbon rear wing, an Inconel exhaust system, carbon-ceramic brakes with ABS, and a tire monitoring system.

The car featured above is from Floyd Mayweather’s own personal collection. 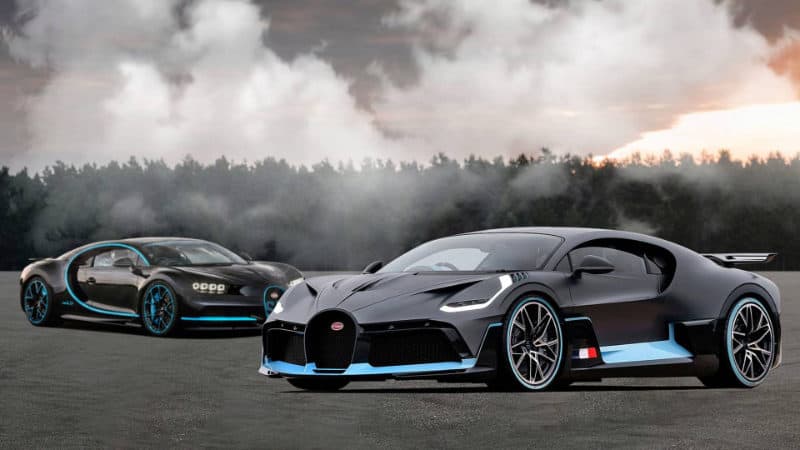 The Bugatti Divo is a mid-engine sports car developed with a track-focused approach and manufactured by Bugatti Automobiles S.A.S.

It was named after French racing driver Albert Divo, who won the Targa Florio race twice in the 1920s for Bugatti.

According to Bugatti, the DIVO is the most agile and dynamic car they’ve ever created.

Limited to 40 units, the car was pre-sold before the public debut to Chiron owners through special invitation by the dealers. It sold out in its first day of availability. 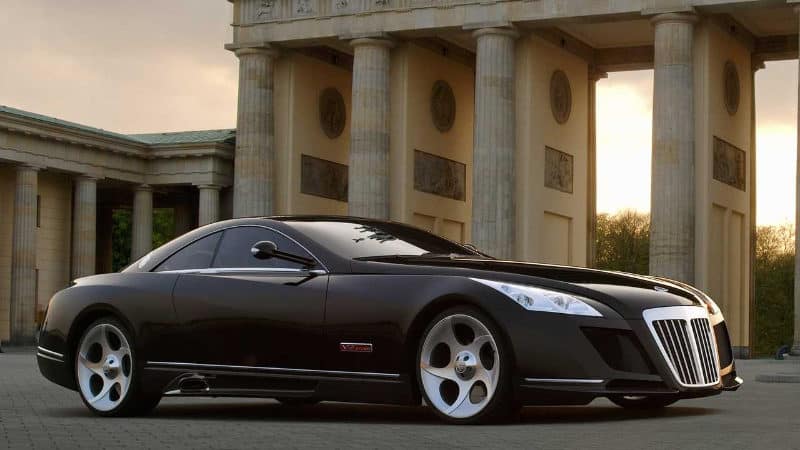 In second place on our list of most expensive cars is the Maybach Exelero from Mercedes Benz.

Despite its peculiar looks, it’s one hell of a high-performance four-seater sports car with a V12 twin-turbo engine.

It was commissioned by a German subsidiary of Goodyear, Fulda, to test their new Carat Exelero tire range.

The Exelero featured in one of Jay-Z’s music videos and was purchased by rapper Birdman according to Top Gear.

It has an impressive top speed of 213 mph. 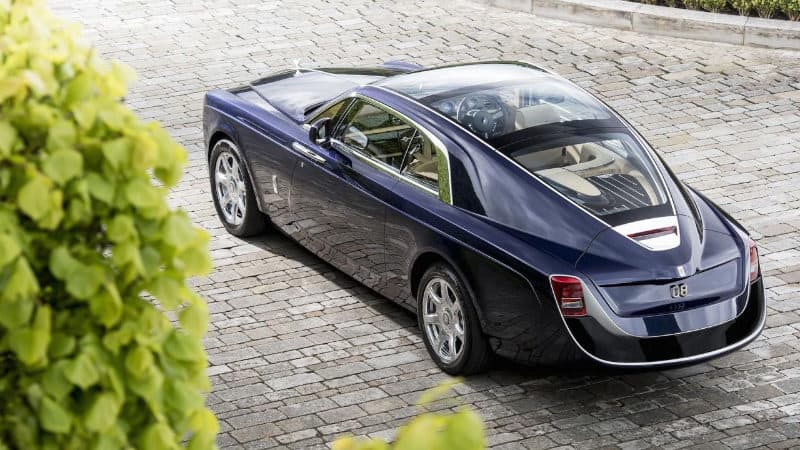 Dominating the top spot on our list of the most expensive cars is what can only be described as one jaw-droppingly stunning piece of handcrafted magic.

A powerhouse of automotive design and engineering, the Rolls-Royce Sweptail is a one-off luxury peace made in the United Kingdom by Rolls-Royce Motor Cars.

Commissioned in 2013 for a super-yacht and aircraft specialist, who’s identity Rolls-Royce does not divulge.

The Sweptail made its debut as the most expensive new car in the world at the yearly Concorso d’Eleganza Villa d’Este event in 2017.

It surpassed all its rivals and remained one of the most expensive cars ever!

We hope you enjoyed our list of the 20 most expensive cars in the world.

We enjoyed putting this list together and looking to buy one or two of these ourselves!

Here’s a quick recap of the 20 most expensive cars in the world:

Back to Top
Close